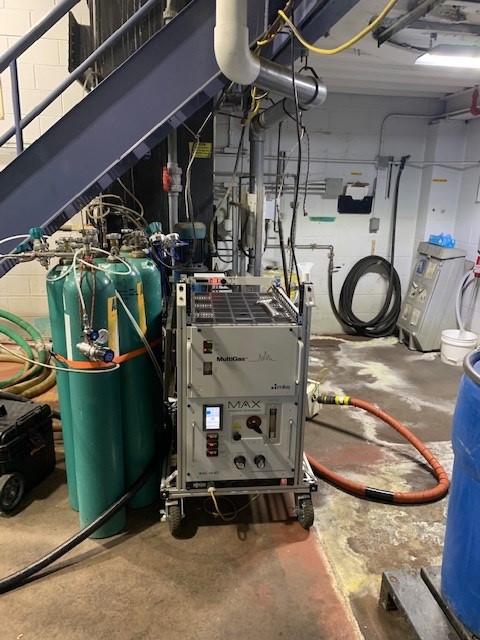 The MKS FTIR can be housed in one of our temperature controlled mobile laboratories or stationed onsite near the source.  500 feet of heated Teflon or 100 feet of heated stainless steel sample line are available.

Some unique project related applications of FTIR sampling and analysis are briefly mentioned below.

Six identical sources were monitored for isobutane emissions.  Real time process changes were implemented to show a reduction in

isobutane emissions as well as the aggregate amount that could potentially be sent to an air pollution control device.

Uncontrolled nitric oxide (NO) emissions were monitored over a continuous 36-hour period.  Emissions ranged from 100 parts per million (ppm) to 3 percent (30,000 ppm).  Conventional NO/NOx analyzers do not have the capability of analyzing above 1 percent (10,000 ppm).  The use of the FTIR allowed for real time monitoring thereby identifying where the maximum NO concentrations were being released from the process.

Non-methane hydrocarbons (NMHC) exiting side by side regenerative t

hermal oxidizers RTO were continuously monitored from a vehicle shredding operation.  The purpose of this test program was to look closer at the “pop it” valve changeover/timing as it related to NMHC spiking.  A great feature of the MKS software allows scans to be recorded as frequently as every 1 second.  Another feature of the MKS software is the ability to go back and look for other compounds.  In the case of this project further analysis of the IR spectrum s

howed other Freon compounds that were present in the RTO exhaust.

n the capture efficiency of the coating device.  These real time measurements allowed for a greater concentration of IPA to be captured thus increasing the concentration at the inlet to the control device. 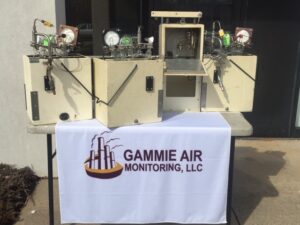 “It’s the little things that matter”, so the saying goes.  GamAir uses dedicated glassware for all condensable particulate matter (CPM) sampling programs.  Three sets of uniquely identified glassware are baked at the required 300oC (572oF) prior to each sampling event.  By using the three sets of glassware the possibility of conta

mination carry over from the Run 1 test to the Run 3 test is eliminated.  Many testing firms will “reuse” the impinger set from Run 1 for the Run 3 test.  Can you really be sure that the Run 3 set has truly be “cleaned”?

This attention to detail has consistently resulted in Field Train Recovery Blanks being less than 0.3 milligrams.